Apple is the leader in terms of revenue and popularity of mobile applications as they have generated close to $3 billion from their Apple iTunes Mobile Application Marketplace with Google’s Android Mobile App Marketplace firmly holding the number two spot with over $420 million in sales.

Apple has been able to take a solid lead in revenue and mobile application downloads primarily because of the popularity of the iPhone, iPad and iTouch but also due an increase in their mobile applications in-app based purchases, which include sales within paid apps such as additional bonus levels and various tools to enhance the player’s mobile gaming application experience. Apple also was delighted to see the solid contributions that their mobile casino applications had towards the overall sales figures and record breaking number of players who signed up to play mobile casino applications. 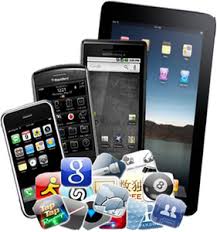 RIM’s Blackberry Mobile App World is also showing a good amount of growth (of almost 70%) in the first quarter of 2011. At the same time, RIM’s market share is only third behind Apple and Android and revenue close to about $300 million in sales.

Microsoft’s Windows Phone 7 is also expected to grab a considerable amount of market share in the near future as they have experienced an increase in sales since the release of their new Windows Phone 7. Although Microsoft is expected to observe an increase in revenue and sales this year, many mobile application developers and mobile application “experts” agree that Microsoft is not yet a worthy competitor in the mobile Smartphone industry.

This article has been written by Manish Sharma.
Smartphone Manufactures Focus on Mobile Applications for Advertising
Mobile Application Combines Social Networking with Location Based Technology