IPhone and Android are the leading OS for Smartphone mobile markets now days. The business phones have changed the way of communication and business. The mobile, a communication tool has been immerged as a great media for internet business and communication. The development of these two mobile operating systems has contributed in this fast business development. Iphone is the most organized and structured OS to define the applications. Android is also not far behind in development of platform and applications. It has proved that there is no limit of application development with these two along with the other platforms like Blackberry, windows, JAVA ME, Palm mobiles etc.

Mobile application market has been triggered further with the new launching of iPhone 5 and latest android version. The cut throat competition in mobile app development has been indulged in android and iphone. Before few years iphone was the only one leader to launch the innovative applications first but now the scenario has been changed, though the Apple is still succeeded in retaining the popularity for its Smartphone and applications in western world. 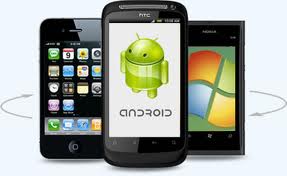 The low costing of Android mobiles and open source factor have made Android the first choice of many common people across the globe. The popularity of both the OS mobiles is comparative among users. Some prefer iphone over android for quality and efficiency and some love to be with android due to efficiency and wide range of cheap applications. However the exact trace out of preferences is quite difficult.

No doubt the app development companies are trying to make over the benefits of each operating system. But ultimately it depends on the skill level of company’s expert are posses in development with the control over the mobile platforms.

There may be some differences among the business phone users of different platforms based on browser, applications, display and performance. In such cases, the responsibilities of mobile apps developing companies increase much to satisfy the application expectations for their clients. Variety of apps development for Android and iphone market places for free and paid has boosted the mobile market. Free application development for market place is also a good one for individual developer or development firm as free application also can be en-cashed by the way of sponsored advertisements and pay per click commission. Thus the development of mobile platforms have raised new arena for developers to apply their skills for establishing amazing custom applications and games for world users that boost the world mobile economy.