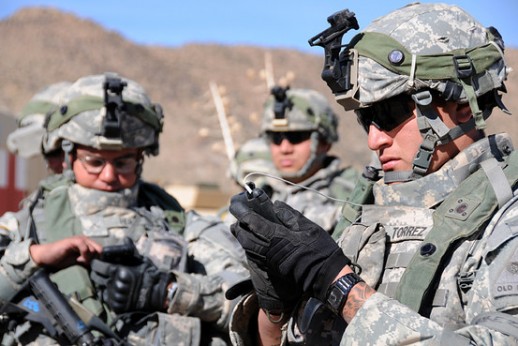 The U.S. Army announced that they will be using the Android and iPhone mobile platforms for all mobile applications and mobile technology on Smartphone devices in the future. Now in their most recently announcement, the U.S. Army announced that they plan to launch their own Mobile Application store where soldiers can download and install mobile application software onto their computers and potentially also their Smartphone mobile devices. This is considered a big step for the U.S. Army as they are taking steps forward into the world of mobility and wireless communication not only in their high-tech devices but also for their soldiers.

The Army Mobile App Marketplace is set to launch in August of 2011 and will have a limited selection of mobile apps for soldiers to download. A majority of the mobile applications are expected to focus on training manuals and productive tools but the U.S. Army has future plans for later developing mobile applications that help map out terrain, locate friendly forces and translate foreign languages. The Army marketplace is also expected to host the US defense department server, which would be accessible only to members of the defense department community.

The Mobile Application Marketplace which the U.S. Army is developing is expected to host both Android and iPhone Smartphone devices although the government has yet to certify any of those mobile devices as secure enough to access its networks. The U.S. National Institute of Standards and Technology have begun the process of certifying the iPhone but they are still a few months away from finishing the iPhone’s certification with Android Smartphone devices expected to be next in line for certification. Soldiers are expected to be able to use the Mobile App Marketplace to download any mobile app that are currently on the mobile app marketplace and there will also be a forum within the store in which the soldiers ask for specific mobile applications that they feel they need and also discussed with fellow soldiers and mobile application developers on how to build new mobile applications which can be beneficial during combat missions.